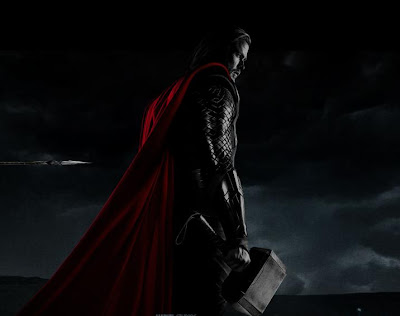 
Out of 5, I will give 4 for this movie. This movie was actually adapted from Thor comic which is a fictional Superhero published by Marvel Comics. At first, I thought it was an epic story but it turns out to be like Superhero Movie.... typical character for any Hero... save the world, met with beautiful brilliant lady and fall in love. But, this movie it's a bit different... Thor was a powerful but arrogant warrior who reckless actions reignite an ancient war (spoil betul). As a result, Thor is banished to earth by his father Odin (to teach Thor humility) where he is forced to live among humans. His power was taken and he lives like a normal people. There, He met with Jane Foster (Natalie Portman)... and slowly he learnt to be more humility, patient and merciful. When the most dangerous villain of his world sends its darkerst forces to invade earth, Thor learns what it takes to be a true Hero.

But, apa yang aku paling tak suka ending of this story... Thor didn't come back to earth as He promised Jane Foster... "I must go back to Asgard but I give you my word, I will return for you" Tapi nak wat camne kan.... the Asgard Bridge had to be destroyed gara2 nak selamat kan dunia dari musnah... whatever. Hopefully, there will be another sequel for this because I still tak puas. I want more... I want more... I want more....


Anyway I really enjoyed this movie.