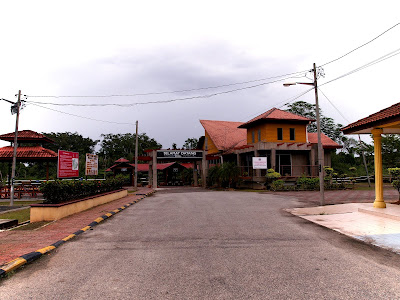 We arrived around 8 p.m & since only two of us, we shared our boat together with two Mat Salleh (save skit)… Caroline from Germany & Sergio from Spain. From two different country but both are staying at London… working there maybe. We don't have much talk on the boat since four of us are so busy focusing on the fireflies. Nice meeting both of them. Actually both are them are architects. Travelling & cycling is their hobby & passion… I guest by reading their blog. At the same time, both of them are doing the charity work, raising fund for the kids… wow, sempat lagi beramal sambil2 tu. Good job… I wish I could do the same one time, Insyallah. Ameen. 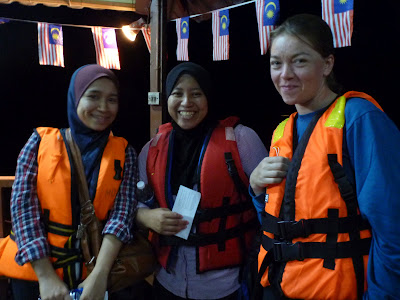 
One boat is charged for RM40 & can accommodate up to 5 persons including the boatman. But, for sure there is no engine boat here only traditional boat for the trip. But, don't worry as you will be provided with the life jacket. So, try to make it 4 people for one trip so that you only need to pay RM10 per person. But, I would say, it was really worth to pay for RM10 for the entry fee because if you're lucky enough, you will see a millions of fireflies appeared at one time. The boat trip normally takes about half & hour but depends on the boat man, sometimes, it may take longer time than usual. Like us, I think we spend more than half an hour sitting on the boat & enjoying the magnificent fireflies flashing their lights.

According to Pak Salih, our boatman, normally the male flashes more brighter compare to the female. This is to attract the female fireflies during courtship. So, you can differentiate just by looking at the light they flashed. Fireflies can live for only two to three months.


There's no specific time to see the fireflies. Throughout the year around 7.30 pm till 2 a.m...the fireflies can be seen. Only during the raining time & strong wind, it will probably not appear & at this time they will not allow visitor to come in. And it depends on the fireflies mood too, according to Pak Salih, sometimes too many of them, sometimes a few only & sometime they may not appear at all. So, everything depends on your luck. As for us, we're lucky enough because almost all the berembang trees at the riverside are mostly full with the fireflies… sometimes it may look like a christmas tree… seriously. Subhanallah, what a wonderful & fantastic creation. 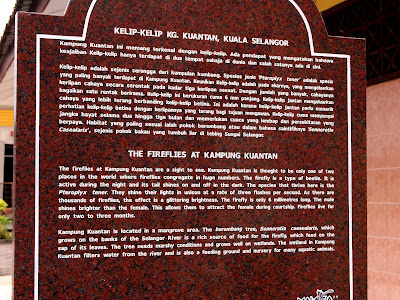 The boat man will ride the boat nearby the riverside so that you could see the fireflies closely & clearly. You're advisable not to touch & catch the fireflies… maybe not harm for you to touch it but since most of the fireflies normally congregate at berembang trees at the riverbank, so, there is possibility that other poisonous creatures may appeared & attacking you, so, be extra careful although you're too excited at that time but think of your life first… it is more worth.
I did not bring my Camera as I was told that only special camera can capture the light of the fireflies. But, honestly, I left my memory card, only camera, so, better not to bring because no use at all. Luckily, Pak Salih said that so far only camera owned by aunty of Sultan Selangor can capture the fireflies… of course high quality camera & I guaranteed the cost must be very very high. But to me, see them in live are more satisfying compare to see them in the image. 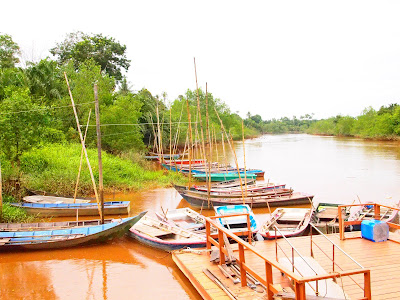 
I was really having fun & hopefully one day I can capture the image of the fireflies in the dark.