Our second day at Krabi was one day trip to Phi Phi Island. This is the main agenda of our Krabi trip… a must visit place while you in Krabi.

As promised with the tour agent, we waited for the transport at Hotel lobby at 8.30 a.m to pick up us. The lorry arrived sharp at 8.30 a.m & there was one Thai lady with the driver, which at that time I believed is our tour guide. She’s young & not so fluent in English. So, not much we could talk during the trip.

We did not straight away go to the jetty. The lorry suddenly stopped at one place to fetch other tourist. OMG, I thought we were the only group with them but out of nowhere, they brought together with us one happy family. Could you imagine that time, small lorry which is supposed to be fitted with 10 person with moderate size now became place which only had limited space to move… and suddenly, it was a heavy rain… fuhh, what a day. We arrived at the jetty around 10 a.m and that time the weather was OK. Alhmadulillah. If it is still raining, I don’t think we can proceed with the trip.

We went to Phi Phi Island by speedboat. A short briefing was given before departing by our Island tour guide, James. 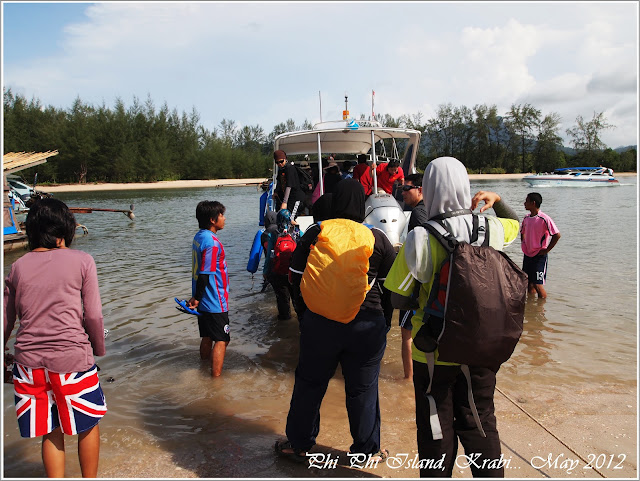 A brief of Phi Phi Island…


Phi Phi Islands are located in Thailand, between the large island of Phuket and the western Andaman Sea coast of the mainland. The islands are administratively part of Krabi province. Ko Phi Phi Don ("ko" meaning "island" in the Thai language) is the largest island of the group, and is the only island with permanent inhabitants, although the beaches of the second largest island, Ko Phi Phi Lee (or "Ko Phi Phi Leh"), are visited by many people as well. The rest of the islands in the group, including Bida Nok, Bida Noi, and Bamboo Island (Ko Mai Phai), are not much more than large limestone rocks jutting out of the sea.

Phi Phi Don was initially populated by Muslim fishermen during the late 1940s, and later became a coconut plantation. The Thai population of Phi Phi Don remains more than 80% Muslim. The actual population however, if counting laborers, especially from the north-east, from the mainland is much more Buddhist these days.

The islands came to worldwide prominence when Ko Phi Phi Leh was used as a location for the 2000 British-American film The Beach. This attracted criticism, with claims that the film company had damaged the island's environment, an accusation the film's makers contest. The film's release was attributed to an increase in tourism to the islands. Phi Phi Leh also houses the 'Viking Cave', from which there is a thriving bird's nest soup industry.

Ko Phi Phi was devastated by the Indian Ocean Tsunami of December 2004, when nearly all of the island's infrastructure was destroyed. As of 2010 most, but not all, of this has been restored.

We stopped here about 45 minutes. Since, it was a short stop, I did not swim. Just taking photos & enjoying the nice view.

Just passed by & taking photos only.

We did not go to the Maya Beach since it was told by our guide that the sea was rough at that time. It was too risky to proceed. But, I was wondering why still so many people already at Maya beach & many boats were there too at that time. Actually, James told me that our boat got 2 engines only, maybe if 3 engines than we can proceed to Maya beach. Ok, understood, meaning our boat is not good enough to overcome the rough wave. I was quite disappointed at that time but what to do, your life is more important. In helpless state, the speedboat turned back to Phi Phi Don and drop us there to have our lunch.

We stopped at Phi Phi Don to have our lunch. What can I say about the lunch, it was awesome. Especially the fried chicken & the chilly. We really enjoyed with the food provided. I will rate 4.5 out of 5 for the foods.

Next, after having lunch, we went for sightseeing, jalan-jalan, taking photos & look around for some souvenirs. The weather was cloudy at that time. 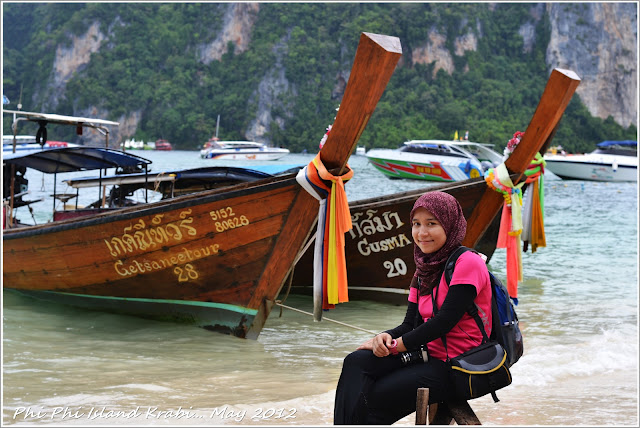 
We started snorkeling after the lunch. The first place, James stopped us at one place where I think, it was not safe to have a snorkeling there. Some of us already jumped into the sea including me at that time and suddenly the waves are getting rough. OMG, I quite panicked at that time because our boat was getting far from me & the waves starting to sway some of us. I was alone that time because I cannot reach other people with that condition at that time, and I was far from other people, so, all I can do was sceraming. Hehehe, luckily there was a life saver with us on the boat. That time, there was one Malay lady (not from our group) almost having a hard time to breath after get into the boat. After the small incident, we went for another safer place for snorkeling.

Actually, that time the weather is quite risky to have a snorkeling. But, since they don’t want to loose their income (I guest), so, they still proceed but at the end not much excitement I could feel.

Our next snorkeling port was no fish. So, we have to find another place again. Again, get into the boat.

The third place, the snorkeling place is OK. Got fish and other sea life too.

The last place also was much more fun. The fish are getting more & more. But, still the same kind of fish. Bosan betul.

In my opinion, I think Islands in Malaysia are much better & more satisfactions.

We back to the jetty and ended the tour around 4 p.m.

We returned to Hotel with (to me) not so much fun plus a bit frustration.