Unplanned trip … that’s what happened to me, Fadd Gojes & Huzz last week. The first agenda of our trip was to attend the wedding of my collegue but it turns out to be surprisingly & unexpected trip. Actually the Idea to visit Tanjung Pagar was came from Miss Gojes but the plan to go on last weekend was proposed by me. I don’t know why I was suddenly felt that I must go & visit this place. What so special about this place??? Maybe, there’s a connection between me & the History of this place… maybe not directly but indirectly… it could be. So, the initial trip to go to Hjjah’s wed not only end up with jalan-jalan cari makan jer but it turns out to be one of the most memorable trip in my life. Anyway thanks to Miss Gojes for your wonderful & interesting idea of visiting Tanjung Pagar. Agak2 nyer, kalau ko tak citer kat aku about this place I would never know that it will soon to be closed.

The initial plan was to go on Saturday but since the return ticket from Singapore to JB Sentral was about too late around 10.30 p.m… ohh my dear… just know the counter ticket man told us that, there was a return ticket at 8.30p.m…. ergghhh… tipu semata-mata. Because of you abang harapan palsu, we had to rush from Kota Tinggi to JB Sentral… just because to catch the 5.30 p.m train… damn. The ending…we had to cancel the trip on that day. And sudah nyer… ke Danga Bay. But our dream not end just like that, we still plan to try our luck on the next day… still have time.

The next moorning, we managed to get the ticket for 9.50 a.m train. Alhamdulillah, everything goes well as it planned & for the first time in my life I reached Singapore. And for the first time too… not for hiking, not for having fun or shopping but… menjejak sejarah di Tanjung Pagar… the main agenda. First time tau… ingat tu. We had to pass thru Singapore immigration first at Woodland station before we can officially enter Singapore. Standard procedure for any outsiders yea. We had to disembark and get into the immigration building for checking purposes. Oppss… small incident happened here when I was about to catch photo of something… luckily I saw Fad give me a hint not to shoot… Fuhh lega jap. Berani betul makcik ni…padahal signboard already clearly stated that “no cameras”. Anyway after spending about half an hour there, passport checking & submission of declaration form, the real journey to Tanjung Pagar is begun. We had to get back into the train & heading to the next destination… the last station. Sempat lagi buat tahi mata tu before sampai. Not only that, aku sempat lagi tanye pakcik train tu kat mana café. Unfortunately, any selling food activities are not allowed once you entering Singapore territory. Actually, I was asking on behalf of someone… sebab nyer orang lain yang lapor…. Ehem ehem. 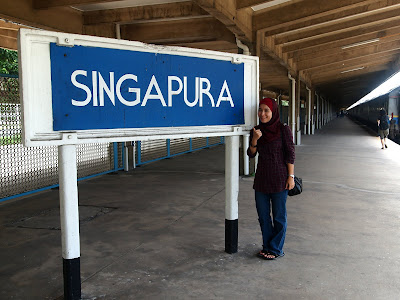 Finally, I made it to this Historical place

After about half an hour trip, we reached Tanjung Pagar station. Alhamdulillah, our unplanned trip finally brought us to the one of the most historical places which is soon to be closed. I was too excited & speechless at that time. Maybe to most of the people there’s nothing special about this old railway station but to me it was so unique with the beautiful & fantastic architecture which you could see almost at every angle of this station. It was still well kept. You can still feel the era of 1950s inside the building with the historical design which is still conserved i.e. the clocks, the ticket counter, the police station, the fans, the departure timing which is still manually being used till now & many unique things you may not be able to find no more in this new generation. 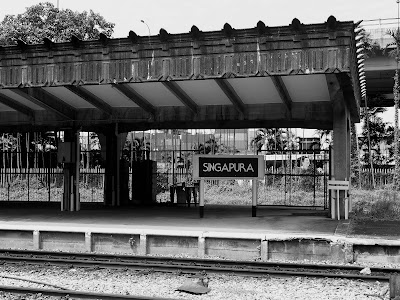 History…
Before the Johor-Singapore Causeway was built, the railway in Singapore was exclusively limited to the island. The construction of the Johor-Singapore Causeway across the Straits of Johor began in 1919, and it was opened to goods trains on September 17, 1923 and to passenger trains on October 1, 1923. Previously, passengers and goods train were transferred at Woodlands to a ferry to Johor Bahru and the connecting train on the peninsula. Tanjong Pagar railway station was completed in 1932. (quoted from wikipedia) 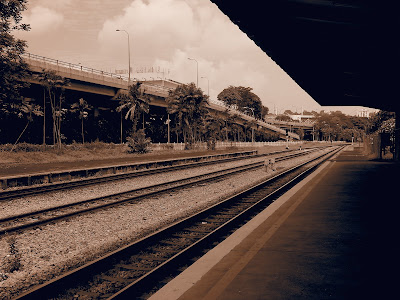 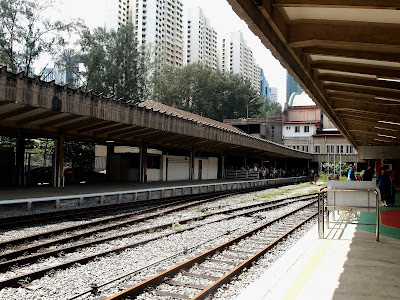 The train station... still maintain its own old unique style 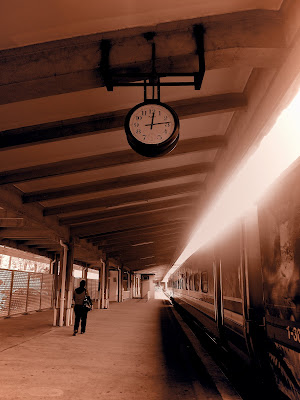 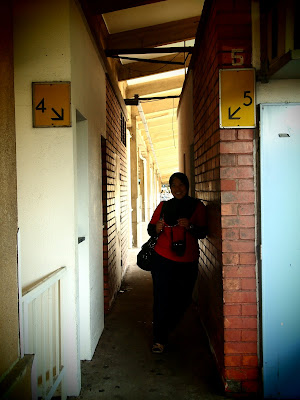 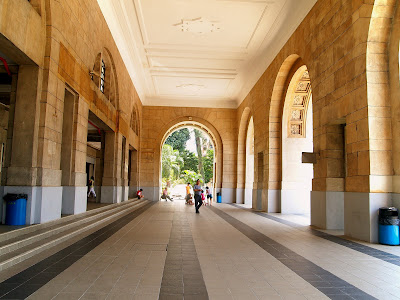 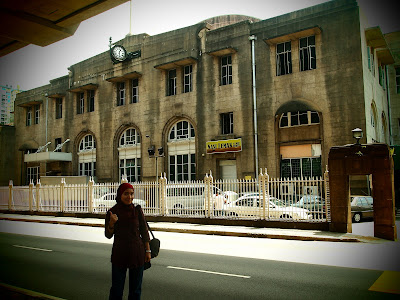 View from the main Road 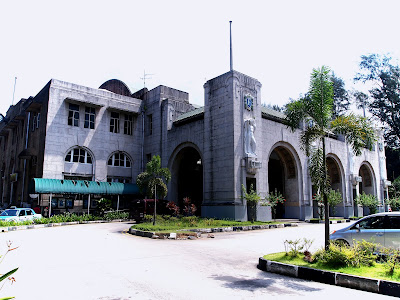 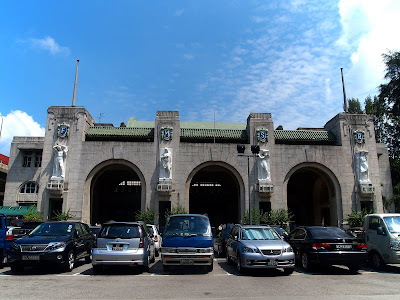 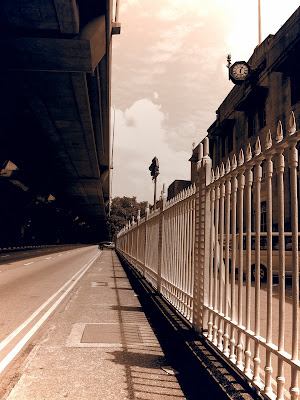 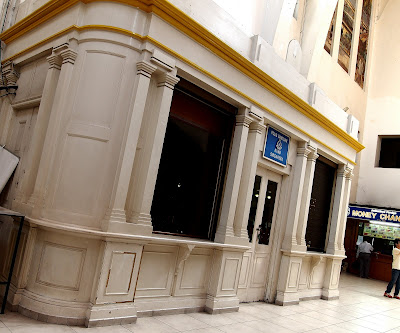 The police station but not in operation 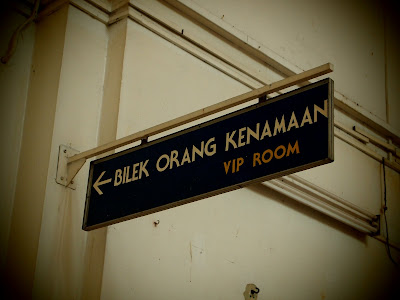 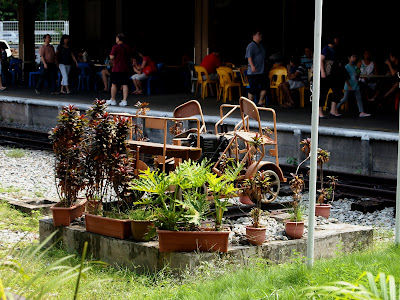 Not sure what is this 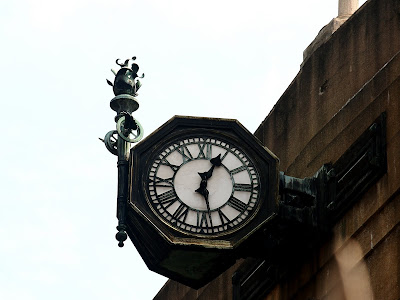 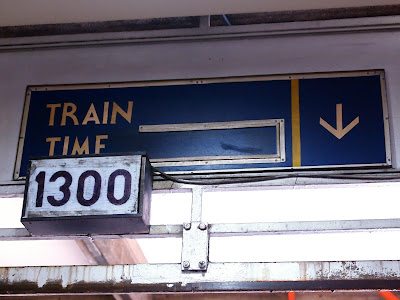 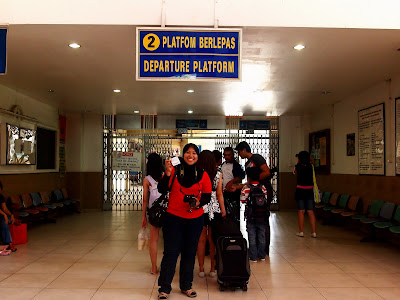 Although it was a short visit… about one and the half hour, still it is really something memorable which I cannot forget. Thanks a million to Gojes for really giving your effort to bring me & Huzz there. It was a wonderful trip and I was really enjoyed & happy to be there.
Anyway, although it will be closing the operation and no more open to public, I really hope that this building will be kept well for the next generation.